"When our knowing exceeds our sensing, we will no longer be deceived by the illusions of our senses." -- Walter Russell

Truthful Planet is an ambitious and humbling project at once. It is dedicated to jump-starting a trend focusing on the awareness that Humanity and Nature have to be protected by seeking the termination of their monetization. Greed is a mere symptom that many see as a sole and easy explanation, while the core issue is profiting from the Earth giving away unconditionally and free of charge.

When such an immutable nurturing principle is regarded and treated as a market share, its exploitation becomes inevitable and eventually turns into pillage causing environmental destruction and human suffering to increase exponentially. Truthful Planet intends to reach out to people who have begun to seek answers or realize the impasse we are faced with - or are already in the know.

Although data ought to be shared to make sense of what is happening to our planet, pointing at the collusion between culprits has had little to no effect at all because Earth's immutable laws only recognize personal responsibility. Only action will ensure success!

More importantly, Truthful Planet regards Knowledge as a tool for boundariless discoveries to resolve the arising dilemmas - and also threats generated by the technocratic age. Our Blueprint will indeed propose a bold solution as how to circumvent any current and highly polarized trends by just offering a different way of thinking shaped by Natural Laws.

Knowledge is unstoppable and the mind has to adapt regardless of the challenges ahead. Automation and smart computers are gradually taking over jobs and within less than a generation the word 'employment' will be regarded as an oddity. Now, this said we aren't in favor of General Intelligence AI or 5G at all. Our stance is that is not because science can do it that we should do it. General Intelligence AI and Synthetic Biology come with huge risks attached, which we tackle in our video: ' 'Your DNA Is Not For Sale'.

Our mission does not align itself with any 'Earth Day' followers, though has its own metaphilosophical Russellian roots. Walter Russell's most important works are without a doubt 'The Universal One', 'Atomic Suicide' and 'The Secret of Light'. Along with Nikola Tesla, he developed the concept of free energy theoretically.

Voluntaryism' Is A Meta-Philosophical Axiom

When scrutinizing the AI trend, we're told to accept the inevitable, that we must merge with machines for our own sake. Voluntaryism calls this coercion. Yet many people regard it as the smartest option ever while not realizing that this technology requires mass surveillance. Moreover and this is mind-boggling: how can so many assume that moving through this technological transition, will generate freedom, considering that economics and science too have done nothing to prevent the earth from being harmed by our toxic consumerism?

Those aspiring to technological immortality, swearing by the word 'evolution', are already beginning to deem as inferior any skeptics looking for long-term answers and restlessly questioning the hierarchical world structure in place for eons. The planet so far, has only known much of the same and with the expansion of knowledge societal dichotomy only become ever more destructive. Yet those calling for 'caution' are seen as fearmongers rejecting 'evolution'.

As long as financial trends continue to manipulate the crowds, voluntaryism will remain a word making some dream of the impossible. Voluntaryism does not necessarily equate to anarchism, because the latter still may promote capitalism. Voluntaryists beg to differ as they regard monetarism as extremely coercive. The flaws are embedded in the premise itself. Today the level of coercion is quite astounding but a majority accepts it as the norm.

In a voluntaryist society, trends for sure would exist but they are never presented as competitive nor coercive by any stretch. Most likely, people would spontaneously segregate themselves intellectually or/and spiritually, but that wouldn't have any social consequences as a vast majority would agree on the premise that coercion and disrespect for Life invite chaos. In this sense, Voluntarysim is a philosophical axiom.

Truthful Planet advocates for a Social Blueprint elaborating on a set of guidelines to help make sense of the world's confusion. Why scientific research and psychology have to progress according to specific natural principles to avoid conflicts of interest biasing and harming holistic thinking.

What are these Principles?

They're forces simultaneously at play that humans cannot alter, therefore they are described as immutable. There are 7 of them (often referred to as the centuries-old foundation of Hermeticism) and which today are scientifically established as they define the forces at play emanating from Electricity. The Electric Universe Theory is currently reshuffling Physics in a great way and is heavily documented on the Internet. These principles also reveal 'Thought' as a mechanism having electric properties because information circulates between neurons in the form of electricity.

The main challenge of a money-free future thus lies in the ability to accept their pre-existence. Humans didn't create them. Although the latter belong to the realm of physics, they also represent the forces of creation altogether. In a nutshell, such an implication is behind the choice of our slogan is:

Life first, its Wholeness and Oneness!

The word 'metaphilosophy' is preferred' to distance ourselves from mainstream academia which hasn't done anything to prevent our unprecedented world crisis. Well, the field must be entirely reassessed. Very few thinkers tackle the core issue, and they remain an absolute minority. However, 'metaphilosophy' merely means beyond philosophy, the philosophy of philosophy. And as we can see today, the realistic assessment that any train of thought not condoning 'Life First, it's Wholeness and Oneness!' is entirely validated by the daily planetary aggression, on a physical and psychic level alike.

We live in a world where everything works in reverse because existential values have monetized conflicts of interest to no end. Since values are inverted finding ourselves back on the right path requires first a burning desire to see this earthly onslaught come to an end. It is only when the understanding of the crisis deals with the 'greater picture' that we allow Holistic Thinking to set in and come to the rescue. The 'ace in the hole' is that 'knowing' binds all the principles for a greater of all good and will considerably smooth out any turbulence inherent to the transition.

The argument in favor of a money-free society doesn't require any PhD far to the contrary, but access to vital information giving a full scope of the damage investigated, and the ensuing conclusion that responsibility is now which of each individual. Embracing the premise of 'Degrowth' for a money-free planet has nothing to do with 'beliefs' at all but Emotional Intelligence as Cosmic Principles resonate deep within.

The Problem With Patriarchy

Our ancient patriarchal structure has gravely endangered the DNA of every living organism on the planet. The video below offers an objective look at world problems from a Natural Law perspective and dissects the consequences of societal hierarchy.

A society embracing Patriarchy tends to be destructive because cold logic always ends up hijacking the nurturing aspect of life. At the end of the day, personal survival is also more important and this means that selfishness remains the main drive. Without selfishness and competition monetarism would inevitably fall apart. Monetarism is a patriarchal invention.

Centuries of competition have led society to the edge of the abyss. The legacy of competition is separation. We feel split from within and we're holding back our emotions for the sake of security. One of the biggest illusions that we entertain is to think that we can battle our way to defeat the opponent(s) instead of asking questions to develop empathy. Instead, we argue to be right.

It is the integrity that must win as the Universe is made of immutable truths. Peace and learning to co-exist are absolutely essential. Our mini-doc "The Fractal Science Of Empathy" here delves into the core of the matter and contends why this shouldn't be a challenge. No matter how we feel regarding our world affairs, simplicity always overrides complexity.

The Fractal Science Of Empathy(bitchute)

It isn't Just About Money But Also Spirituality!

American Indigenous often describe our societal "cognitive polarization" as the root cause of our materialist collective psychosis and which they called 'Wetiko'. In a nutshell, Wetiko translates what we accuse others of doing ourselves. It is because mimicking is part of human behavior. The only way to avoid this aspect is through education. Mimicking works fine for animals but we are no animals and we're here to also learn this harsh lesson. However, society is influenced by this 'copycat mentality' which has completely destroyed all human rapport as many don't even notice how it affects their thoughts and drains them spiritually. Hence the success of Sacred Plant Medicine as the video demonstrates. 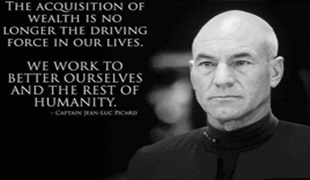 Nagel is one of the world's leading philosophers of mind. Although he is an atheist, he argues that the materialist approach to life and mind has failed to explain consciousness, intentionality, meaning and value. This failure threatens to unravel the entire naturalistic worldview in biology, evolutionary theory and cosmology. We need a new kind of science.

Giving Up Darwin. A Fond Farewell To A Brilliant And Beautiful Theory

Accepting the theory as settled truth - no more subject to debate than the earth being round or the sky blue or force being mass times acceleration - certifies that you are devoutly orthodox in your scientific views; which in turn is an essential first step towards being taken seriously in any part of modern intellectual life. But what if Darwin was wrong? 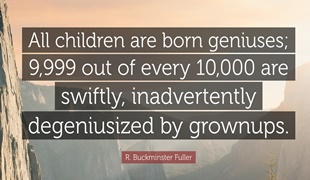 A new study on how young children learn could help parents teach their children and help answer the question of nature versus nurture. In 1968, a study conducted by George Land and Beth Jarman found that 98% of children were considered creative geniuses by NASA standards. But as this group grew older, that number dropped off rapidly; at age 10, it fell to 30%, by age 15 it dropped to 12%, and by adulthood, it was just 2%.